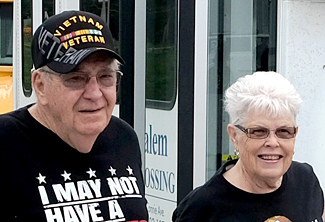 “Gotta have faith and gotta have love!” This is one of the guiding principles that shape the lives of the family of Stu and Sharon Boaz. In 2019, they put some formal philanthropic power behind that love, working with the Community Foundation to form the Stu and Sharon Boaz Touch Tomorrow Fund.

Stu Boaz was born on November 5th, 1941 to Lois Evans and Gladden Boaz in Greenville, Indiana. His father worked several different jobs to support the family. He attended Greenville Elementary through eighth grade before moving to New Albany High School. During his years in Greenville, he enjoyed playing baseball. “It was a close knit community; we had fun together and cried together,” Stu said.

Because he didn’t have a car to commute back and forth, Stu was not able to pursue his passion for baseball in high school. Instead, he was a part of Glee Club at New Albany High School. Upon graduation in 1959, he became a licensed barber for six years after six months of training. In August of 1966, he joined the Army at the age of 25. Having spent 19 months in Vietnam, Stu recounts his experiences, “I went into service in February and got out in December of 1968. I lost my buddy there. His daughter found me in 1999 and there’s a veterans reunion every other year.” He added, “Some of those guys haven’t seen each other in 40 years!”

Upon his return, Stu worked at Plumbers Supply Company for 30 years and continued as a maintenance worker at West Washington School Corporation for 12 years up until retirement in 2001.

With two sons of his own; Chad and Craig Boaz, Stu met Sharon through a friend. Their paths crossed after years of leading separate family lives. “You see, it was the trend back then where the boys of ‘59 would marry the girls of ‘61,” Stu said. They fell in love and quickly evolved into a marriage lasting more than 30 years. The couple married in November 29th, 1985 and shortly moved to Fredericksburg.

Sharon Sue Boaz was born on May 20th, 1943 to John and Dorothy Mae (King) Trinkle in New Albany, Indiana. Graduate of New Albany High School in 1961, Sharon was active in several clubs and participated in the high school band playing the clarinet. Speaking of her childhood, she often mentioned her grandparents. “She always went to Grandma King’s house and Grandpa would come pick her up on Fridays,” Stu shared. For Sharon, her grandma has been a major influence in her life. “She lived next door to her for many years where she would teach her how to cook,” Stu stated.

Stu and Sharon share similar traits in personality. “She worried a lot, but she was always happy and positive,” Stu said. A mother of two boys, Forrest “Joe” and Charles “Chuck” Walker. Sharon began working when Chuck started school. She worked as a secretary for the West Washington School Corporation for 32 years.

In 2018, Stu was faced with the death of his wife. “She has always had a bad back,” Stu said. “She had surgery and after the second one, she had a stroke.” Despite the many physical and emotional challenges faced over the course of life, Stu maintains his bubbly and positive character. “I’ve dealt with many deaths, but you just have to get up and go on. You can’t let it whip you,” Stu stated.

As an Agent Orange victim, Stu has experienced a range of diseases. A chemical weapon whose effects are still being felt today, Stu shares the various medical conditions: “…prostate cancer, Parkinson’s Disease, three stents, two heart attacks —all Agent Orange related.” He added on at the end, “other than that I’m in pretty good shape!” Optimistic by nature, he would always say, “I woke up this morning, it’s a good day!”

Strong in their faith, Stu and Sharon are members of Westview Christian Church in Campbellsburg, Indiana. Outside of work, Sharon enjoyed outings at restaurants, yard work, traveling, dancing, and spending time with family. Although she didn’t know how to sew, Sharon started the Prayer Blanket Ministry which serves to be her biggest accomplishment.

Stu is an active member of the Fredericksburg Lions Club and served as a Fire Department Volunteer in Greenville for 10 years. In his free time, he enjoys playing cards, dominoes, and spending time with family.

“I have a great appreciation for the Foundation and hope that this fund can be used as needed, in different places,” Stu said. After Sharon’s passing, Stu established a legacy fund at the Community Foundation to bring a sense of strength to Washington County’s culture and community.