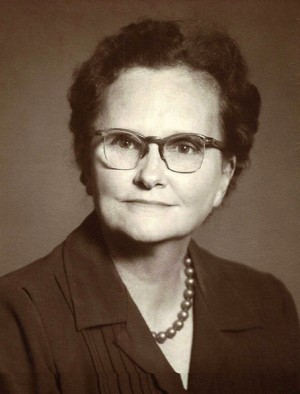 Loving, caring, compassionate, thoughtful, strong….. are all words the leap to mind when describing Lucile McIntosh Rawlings. But to put it all in one sentence, she is probably summed up best by her son, Keith: “She was one helluva woman.”

Life was difficult for Lucille, raising three boys alone after her husband died in 1938. Her father, Joseph, was very involved, helping her to raise three very active boys. “We never had much cash,” recalled Keith, “but we managed. We raised most of what we ate. We knew Mom was doing the best she could for us.”

“She loved flowers,” recalled Melinda Rawlings Farmer. “My first memory of flowers is because of her. She also canned a lot, including pickles, which I loved. My grandmother was one of my favorite people in my life, even though she passed when I was only 8 years old. Gardening, canning, Sears & Roebuck Catalogue paper dolls, shadow figures casted by the light of her kerosene heater, Friday night supper, and attending church. All wonderful memories.”

Raising active boys was a challenge. “She bought each one of us a set of ice skates,” remembered Keith. We had so much fun skating down the hill, playing ice hockey and sledding. I remember a friend had a 1929 Chevrolet and one year the pond froze so hard we drove the Chevy right on top of it.”

Lucille worked hard to provide for her family. She worked at the Hardinsburg Bank for several years and eventually became a teacher in Fredericksburg. She taught elementary students, primarily third and fourth graders, for several years.

Yes, life was hard, but Lucille persevered. She was determined to raise her boys right and she was quite the disciplinarian. As was common at that time, if any of the boys said a bad word, they knew the consequence from their Mom- she would wash their mouth out with soap.

Because of Lucille’s caring, loving nature, Dale left his estate to establish the Lucille McIntosh Rawlings Scholarship Fund, to help future generations of Washington County students pursue a degree in Education. Lucille’s impact as an educator will now go on forever.