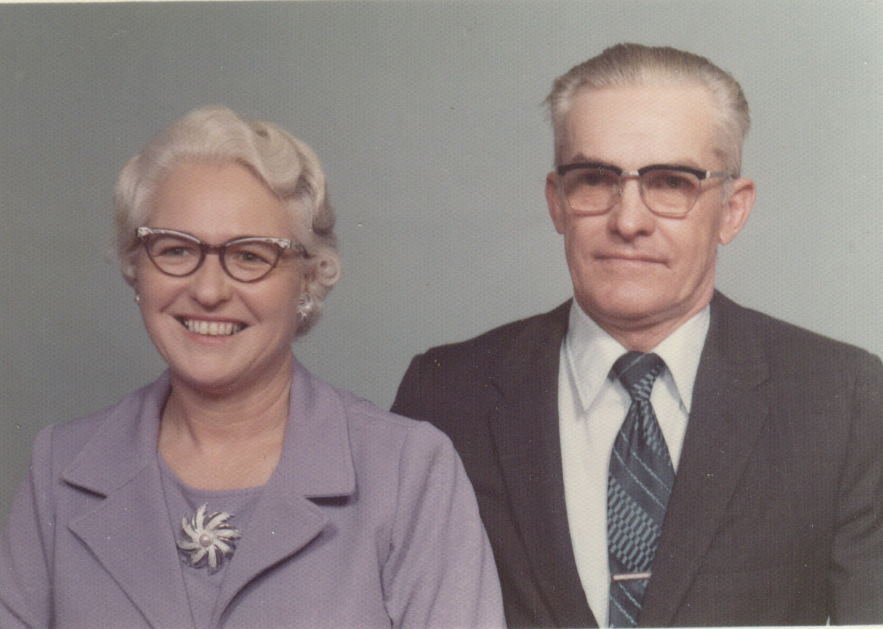 “We didn’t have much money, but we had lots of love and lots of friends,” recalled Gle Etta Williams of her childhood.  “We never did get to take a family vacation because we had to be home every night to milk the cows.  But we had a good life and wonderful parents.”  The parents Gle Etta refers to are Ralph and Mae Decker.  They worked hard, laughed often and provided moral guideposts for their children.  Now, thanks to a generous gift to the Washington County Community Foundation, Ralph and Mae will be able to help future generations of Washington County youth achieve their dreams of attending college, through the Ralph and Mae Decker Scholarship fund.

Ralph was born on May 11, 1911 in Grayson County, Kentucky to Bill Louis Decker and Ivy (Newton) Decker.  He had five brothers and six sisters.  Times were tough and Ralph, being one of the older children, had to help support the family.  He was able to finish the fourth grade, but then had to go to work full time.  When he was older, he went to work at a Civilian Conservation Corps camp in Utah.  He sent money home to help support the family.

Later, he moved to Chicago to work, but then the Depression hit and he lost his job and could not find work anywhere.  However, every dark cloud has a silver lining and the silver lining for Ralph was that by moving back to Kentucky, he was able to meet Mae, his future wife and life long love.

Mae was also from a very large family.  She was born on March 28, 1920 in Grayson County, Kentucky to Mitch Stevenson and Daisy (Johnson) Stevenson.  They lived on a farm and Mae’s father expected all his children to help out with the farm chores.  “We worked hard chopping wood, cutting corn and tobacco, cleaning out fence rows and hauling rocks,” recalled Mae.   “Back then, we did not have electricity, radio, car or phone.  I had to walk 2.5 miles to school.  It was one room and we had one teacher for eight grades.  I was able to finish the sixth grade.  Then I had to help out more on the farm.”

The nearest town was 15 miles away, so going to the movies was not an option.  “We played with neighbor kids,” stated Mae.  “We played hide and seek and we had great taffy pulls.  On the 4th of July we would make ice cream.  The 4th of July was a big celebration for everyone.  In the summer, we also enjoyed going to church revivals.”

Mae and Ralph met when he returned to Kentucky; however Mae’s father did not approve of the relationship and forbade Mae to see Ralph.  However, Mae’s heart told her otherwise and she and Ralph began corresponding through notes that they exchanged in a rabbit hut.  When Mae turned 18, they “ran off to get married.”  “I knew my father would be angry, so we moved to Greenwood, Indiana and got jobs at a canning factory.  We stayed there several months and saved our money.  Finally we returned to Kentucky and bought a 2 room house.  We furnished the whole house for $65.00.  We were so proud of our house and we were very happy.”   They stayed in Louisville for seven years, while Ralph was employed by Porters Paint Company.

Time heals all wounds and eventually Mae and her father mended their differences.

In 1949, Ralph and Mae bought a farm in Hardinsburg, Indiana.  While raising dairy cows, Ralph also worked as a Moorman feed salesman.

Life on the farm continued to be hard for Mae and Ralph, but they greeted every morning with a smile and reveled in the promise of a new day.  “I helped with the cows and hogs,” stated Mae.  “I had a large garden and we canned our vegetables for the winter.  I made all of the clothes for my girls.  Back then, material was three cents a yard, so you could make three or four dresses for a quarter.”

“We were living in a log house.  It was very cold and did not have electricity or running water, so Ralph built us a new house.  We were on the ‘pay as you go’ plan.  But that was OK, because after three years we owned the house and didn’t have to borrow any money.  Ralph was a firm believer that if you couldn’t pay for it, you didn’t need it.”

“My parents were a little over-protective,” commented Gle Etta.  “They lost a son at the age of two, so that made them very protective of my sister and me.  Mom was a good teacher.  She taught us to read and to write our numbers before we started school.  We knew all the books of the Bible and all the nursery rhymes.  She taught us a lot.”

“We had good neighbors,” recalled Mae.  “We would visit them, go to church and Sunday School and the girls had lots of friends who enjoyed the farm.  Ralph and I didn’t get to take our kids on family vacations, since we had the milk cows.  But we would split up and take turns taking the girls on short trips.  We were happy.  We had 50 years together and we had a very good marriage.”

After retiring, Ralph enjoyed music, especially country music, art, fishing and carpentry.  The walls of the house in which Mae now resides are filled with many of Ralph’s paintings.  Ralph passed away on October 25, 1988, just two months after the couple celebrated their 50th wedding anniversary.

Mae enjoys quilting.  She has made a quilt for her two daughters, five grandchildren and thirteen great grandchildren.  “I told them that I may not be around when they get married, but I wanted them to have a wedding present from me anyway.”

When asked why she was establishing a scholarship fund with the Foundation, Mae replied “It is just something I have wanted to do for a long time.  I wanted to do something special for Ralph.  He was always interested in children getting a better education than he, as he was unable to go to college.  I think he would be very happy with this scholarship fund.”

The Ralph and Mae Scholarship fund will award a scholarship to a Salem High School graduating senior.   Preference may be given to students who intend to pursue a career in nursing, theology, missionary work or a healthcare related field.