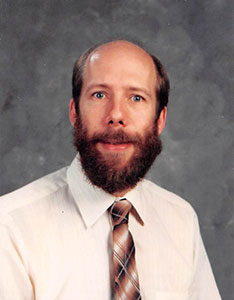 Carl Lee Mitchell was born on May 25, 1952, in Indianapolis, IN, to Dorothy Lucille Chastain Mitchell and Lee Weir Mitchell. Carl's first year of life was in the Indianapolis area, where his parents were temporarily living due to Carl's dad serving in the state auditor's office. From Carl's earliest baby pictures, he seemed to smile most of his life, and one of the things everyone still remembers about Carl is his smile. No matter what came his way in his 60 years, he could find a reason to be happy and enjoy life to its fullest.

When Carl was a toddler, the family moved back to Salem, to the home at 206 East Walnut Street that Lee had purchased in the 1930s. Carl grew up there, and except for his college years at Indiana State University, he lived in that house nearly his entire life. He was the neighbor who would till your garden, plant your tree, and dig the hole if you had to bury your beloved pet. He was the neighbor who came to the door to share producesweet corn from his big garden by Brock Creek behind the old Shell Station, or tomatoes from the garden in his back yard. Carl was the neighbor who shoveled your sidewalk when it snowed, fixed all the kids' bikes, helped you finish your home or car repair projectand always refused payment. When Carl became unable to garden, the Mill Street/Brock Creek property was donated to the City of Salem to be used as a community garden or green space.

As a little boy, Carl learned to read early, and his parents took copies of The National Geographic magazine to church so he would sit more quietly. He was a voracious reader, and would have liked to read all the books in the Salem Public Library, where he frequently checked out books or sat reading the current month's magazines. But the library kept acquiring, so the task was never quite achieved. He had an unquenchable thirst for knowledge, and his memory was beyond compare. It seemed he knew everything about some things, and something about everything.

Carl was a 1970 graduate of Salem High School, and earned degrees from Indiana State and Indiana University. He taught for 17 years in the science department at Salem High School, and later worked at Morgan Foods in Austin, IN, where his nickname was "Professor." He found teaching opportunities everywhere he went, including many years as the candlemaker on the green for Old Settlers' Days in Salem. To honor his love of learning, more than 40 boxes of books, acquired by generations of the Mitchell family, were donated to the library prior to the sale of the Walnut Street house. Historic family photos and items from the medical practice of Carl's grandfather, James J. Mitchell, MD were donated to the Stevens Museum.

Carl was a member of Cub Scouts, Boy Scouts, and as an adult, attained Order of the Arrow. He served as assistant leader to Boy Scout Leader Gary Graves, and later when Carl's son Alex was old enough, Carl was co-leader of the den. Scouting was an important part of Carl's development, and he always loved hiking, camping, knot-tying, and building a campfire, or a fire in the wood furnace that helped heat the big house. Not just hiking and camping, but all kinds of travel were a thrill to him, and he saw as much of the country as he could manage. Scouting was also formative to his deep desire to serve others. He lived to teach and to serveand to sing.

Carl was famous for his voicea deep bass that could be raised to an impressive decibel level if necessary in "teacher mode," or fall to the softest, sweetest lilt when he was singing an emotional part of a song. He sang in school, including Baker's Dozen in Salem High School and Men's Glee Club at Indiana State, and he sang at church. Carl was a member of the First Christian Church (Disciples of Christ) choir from high school until his death, and sang in barbershop quartets in church and other venues. He was also in many musical plays, culminating in the part of Tevyefor which he grew his beard long and bushyin a local production of "Fiddler on the Roof." Even when the brain tumor took so many things away from him, he could still sing. He sang a duet with his cousin Paula Kemp as he lay in bed just days before his deathsteady as ever on the bass part to "Amazing Grace" with Paula's beautiful soprano. He had sung at many weddings and funerals, and at his Celebration of Life, the guests sang "How Great Thou Art" together as a benediction.

Carl died at the age of 60 in Scott County (IN) Hospital on September 12, 2012, of a cancerous brain tumor. He was an embodiment of The Golden Rule. He did not preach, or judge, or find fault. He simply lived his life well in the community he loved, listening to his heart and not focusing on success as others might define it.

Carl Lee Mitchell and Sherri Luse Mitchell were married for 30 years and were the proud parents of one child, Alexander Guy Mitchell, who carries on the family traditions of seeking knowledge, loving music and listening to his heart.