“We have always supported our church and missionaries,” commented Roy Lee. “We wanted to leave some money for various charities and our church. We wanted our gift to live on forever.” Because of their strong desire to give back, Roy and Mae Lee have established the Sugar Creek Christian Church Fund with the Washington County Community Foundation, which will provide annual contributions to the church from Roy and Mae, forever. 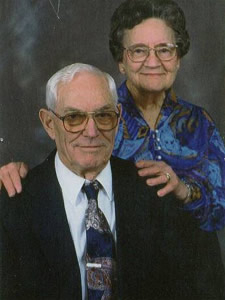 Roy Gilbert Lee was born at home on February 9, 1917 to Harry and Flona (Rosenbaum) Lee. Being the oldest child, Roy later welcomed his siblings, Paul, Esther, Virginia and Ethel to the family.

Roy attended Middle District School for first and second grades and then attended Campbellsburg Elementary and High School, when his family moved to Campbellsburg. While they lived in Campbellsburg, Roy’s father worked for the railroad. Roy worked odd jobs for neighbors until 1933, when the family moved again to live on a farm. Roy worked on his father’s farm as well as for other farmers to earn extra money. He graduated from high school in 1936.

Mae was born on December 10, 1919 to Oscar and Zenobia (Martin) Wesner. She was the second child born to Oscar and “Nobia” following, her older sister, Christine. Mae then welcomed two younger brothers, Ellis and Wayne.

Mae was an “A” student and attended school until the eighth grade. However, like so many others of the time, she was not able to attend high school.

Roy met Mae in 1937. “I was looking for a nice farm girl,” recalled Roy. “One of my friends said he knew of a nice girl who lived down the lane. So I drove down the lane and introduced myself. We started dating and three years later we were married. We would have married sooner, but we didn’t have any money. It took me three years of working for farmers and selling household goods door to door to save up so we could marry.”

Roy and Mae were married on February 28, 1940. For the first eight years, they rented farms. They bought their first farm in 1947. “It was 300 acres,” stated Roy. “It was between Tunnelton and Ft. Ritner. It was a flexible operation as we had grain, livestock and chickens. The bad thing about it was that it was in the bottoms and the river flooded over the road once or twice a year.”

In 1963, Roy and Mae moved their family, which had grown to 6 with the blessed additions of Nelson, David, Philip and Thelma, to Mae’s home place. This farm was 160 acres. “We knew we needed to get out of the river bottoms,” stated Roy. “In the 1950’s we lost crops three years in a row. I never learned to swim ‘cause my Mom wouldn’t let us in the water when we were growing up. I crossed that river in a row boat several times when it was out and I couldn’t swim a lick.”

In 1969, the Lee’s purchased the farm adjacent to Mae’s home place. They re-modeled that house and lived there.

“I remember living in the river bottom,” recalled Philip. “It was like living in another time. We didn’t have any close neighbors. When the river was out we had to park about a mile down the lane.”

The Lee family enjoyed their time together, whether it was at work or play. “We always had to help out in the garden,” stated Philip. “I remember Mom would always threaten us when we got lazy and she would say, ‘You better get out there or you won’t have anything to eat this winter.’”

Thelma recalls, “I have fond memories of the family seated on the back porch, each of our laps cradling a bowl of peaches for peeling. Whatever the task at hand, it was understood that we would work hard and have fun in the process.”

The family had a variety of pets, including a raccoon and flying squirrels. “Nelson and David trained the raccoon to take peanuts out of your shirt pocket,” stated Philip. “One time, the flying squirrels got loose in the house. They kept flying from one curtain to another.”

Nelson recalls, “After school each day, we would try to put a collar on the raccoon. One would give him something to eat while the other tried to get the collar on. Finally, we got the collar on, and then a few months later we were able to snap the hook to a lead chain in the ring on the collar. The raccoon tamed down eventually so that he could be let loose from the chain.”

The variety of pets that the children had is a testimony to the patience and love of their parents. Each pet required a special cage and Roy was always there for them ready to help construct the proper cage. Of course, Mae’s patience for having such a variety of creatures around the house demonstrates her love and support for the children. Their pets included dogs, cats, flying squirrels, a raccoon, and pigeons.

“We were blessed to live on a farm, but even more blessed to be raised in a Christian home,” states Nelson. “We were taught to be responsible, and do an honest days work for the pay that we received. We were taught to love others and be generous in sharing what we had with those in need, but also not to let anyone mistreat us or abuse us without working for a solution to the problem.”

As most families, the children made their way into the world. David farmed with Roy for 17 years before Roy retired in 1982. Philip went into the feed and fertilizer business. Nelson went into the ministry and Thelma married a youth minister, Phillip McDonald.

In 1995, Roy underwent a heart surgery, which included five by-passes, a valve replacement and he also received a pacemaker. A few years later he had another major operation for cancer treatment. Mae experienced a major stroke in 2000, from which she has not fully recovered.

“My parent’s enduring love and commitment is obvious to all who witness his daily routine,” affirms Thelma. “My Dad arrives at Mitchell Manor around 9:30 am and sits and holds my mother’s hand and talks to her, takes her to an occasional activity, and to the hairdresser every Thursday. He takes a break at about 12:30 when my mother takes a nap. He returns and sits during the afternoon, often until 4:00 pm, at which time he makes the journey back to his Washington County farm.”

Thelma fondly avows, “The strength of my faith in God, and commitment to my husband and my family are deeply rooted in a life well-lived…the life of Roy and Mae Lee.”

“We were always active church goers,” stated Roy. “We would drive pretty far and we never missed. Mae played the piano for several years. We always supported the church and missionaries. We thought that when we were gone we wanted to leave some money to various charities, including our church. Then that gift would live on forever.”

The Sugar Creek Christian Church will receive an annual gift from Roy and Mae, forever. Their support of their church will live on, as will their values, beliefs and legacy.