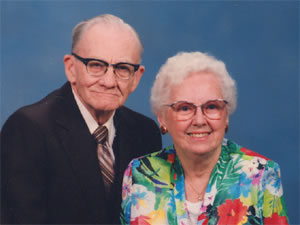 Howard Hinkle held this belief to be true: If human hands made it, then human hands can fix it. To that end, he dedicated a significant portion of his professional career to repairing automobiles. And now, that belief will live on in Washington County forever, as Howard’s son and daughter-in-law, Max and Phyllis Hinkle, have established a scholarship fund with the Washington County Community Foundation in honor of Howard and Juanita Hinkle. The scholarship will help Washington High School graduates pursue post-secondary education in vocational trades.

A life-long resident of Washington County, Howard was born on February 9, 1914 to Earl and Emma Hinkle. He graduated in 1933 from Salem High School. That was on a Friday. The following Wednesday, Howard started to work as a mechanic for Simpson Brothers Construction Company. He worked there for about a year. "I started to work on automobiles when I was twelve years old," Howard once stated. "It was all I ever knew."

In 1934, at the youthful age of 20, Howard went to work in the back section of a garage that he and Garrett Thompson rented on Poplar Street. "He sold cars in the front and I leased and ran a garage in the back," Howard once commented. However, World War II put an end to this ideal relationship. "During the war there were no cars to sell," Howard once explained. "He (Garrett Thompson) went to the powder plant and left the whole thing to me." Howard then bought the business for $50.00 and named it Howard Hinkle’s Garage. "I had it all figured out that to do good meant that I had to make a gross profit of $7.00 a day. Back then what you got was yours to keep. There weren’t any taxes except for the County Courthouse Tax."

In 1946, Howard and Garrett again joined forces and opened an Oldsmobile Dealership with garage services and called it Salem Motors Company. Four years later, Garrett passed away. "I took it all over myself and I have been at it ever since," Howard once commented. "I’ve sold quite a few automobiles in my lifetime. We could repair anything from the front bumper to the back; from the top to the bottom. I always said, ‘If human hands made it, then human hands can fix it.’"

At age 68, Howard decided that he deserved a rest. "Forty-eight years in the car business should do anyone justice," Howard stated. But even then, Howard did not totally give up the car business, as he leased his garage to a local gentleman and then agreed to stay on as a mechanic for his new tenant.

Howard’s love of mechanical engines was not limited to automobiles. He also loved motorcycles. "I’ve been all over the country on one," Howard once proudly stated. Howard and Juanita were also avid car and motorcycle race fans.

Howard’s wife, Juanita (Myers) Hinkle, was in the same Salem High School graduating class with Howard. She was born in Washington County on January 3, 1914 to Orlando and Maude Myers. Juanita went to college to study education. She received her teacher training at Central Normal, Ball State University and Indiana University.

Juanita was a life-long teacher, a career that she dearly loved. She taught second grade at Little York Grade School for two years. She went to South Bend for one year and then came back to the area, teaching at Campbellsburg, then returning to Ft. Wayne for another thirteen years. Juanita ended her career in the Salem School System. She taught at Salem Elementary and then Bradie Shrum Elementary School for 17 years, retiring in 1975. During her tenure at Salem, Juanita spent two and one-half years teaching Special Reading and during her final year of employment, she was Supervisor of the Tutorial Program and Teacher’s Aid Program.

Both Howard and Juanita were active in the community. Howard was a 50-year member of the Salem Masonic Lodge and a 50-year veteran as a Salem Volunteer Fireman. Howard was also in the Knights of Pythia for over 40 years. Juanita played the piano in the church for many years and was a member of the Daughters of the American Revolution. Both Howard and Juanita were members of the First Christian Church.

In 1997, an elevator was installed in the First Christian Church, due largely to a fund that was established by Howard’s family in his memory. Howard had passed away on September 10, 1995. The need for the elevator was made evident during the latter years of Howard’s life, as he, along with other members of the congregation, were unable to attend services in the sanctuary because of the steps.

The scholarship fund established by Max and Phyllis in honor of Howard and Juanita beautifully combines the two things that they dedicated their lives to: auto mechanics and education. Now, every year in Washington County, a deserving student will receive a scholarship to pursue post-secondary education in vocational trades, as a permanent tribute to Howard and Juanita. These students will learn what Howard knew all along, "If human hands made it, then human hands can fix it."