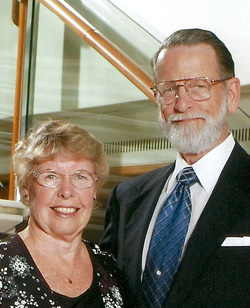 Bruce and Linda Grosvenor never imagined that they would end up living in Washington County. Having spent most of their lives in the larger cities of Indiana, a small, rural town with fewer than 30,000 people was the last place they thought they would find themselves.

But, fortunately for Washington County, their path led them down many different avenues, and eventually brought them right to Salem, IN.

Bruce was born in Fort Wayne, IN in 1937 to Bruce W. Grosvenor Sr. and Juliette (Wilson) Grosvenor. He was an only son but had two sisters, Diane and Susan. When he was growing up, Bruce's father was a salesperson and spent much of his time working, therefore, he was not able to be home as often as he desired. Because of this, Bruce often spent a greater amount of time with his mother. He says of her, "[She] was always very supportive of my activities and was always positive towards my actions, good or bad! She was quick to praise, but also quick to remind me when I was off the line somewhere."

Bruce describes his childhood years as filled with a "lot of good memories and very few bad ones." Growing up in a middle-class family, they lived in several different places. During his preteen years, from about nine years old until he was twelve, he even got to experience what life was like on a fully operating farm! His life was secure and lived as a true child's dream, unexposed to most of the bad things happening in the world.

But this blissful childhood was forced to an end when Bruce was a senior in high school. At eighteen years old, Bruce was suddenly required to become an adult. That was when his family lost their father to a heart attack.  This called for a lifestyle change for the whole family.  His mother had to go to work and Bruce had to begin providing some financial support, as well.  So he went to work at a local grocery, a service station, and a household goods distributor.

In addition Bruce decided he needed to get a college degree and further his education. Initially, he attended Butler University in Indianapolis.  Working forty hours a week and trying to take 18 credit hours didn't work out so well.  He then transferred to Indiana University-Purdue University in Indianapolis for a couple of semesters.  That is when he was informed that Uncle Sam desired his presence.  He was drafted in 1961.  Upon return from his two years of active duty in the U. S. Army, Bruce attended Indiana Central College (which is now the University of Indianapolis) and received a degree in liberal arts with a concentration in psychology and economics.

While his path was always ever winding, one particular destination proved to be especially rewarding for Bruce. Shortly after his father died, a friend of Bruce's, who with he worked, arranged a blind date for him! Unbeknown to him, the person on the other side of that scheme would turn out to be his future bride, Ms. Linda Clark.

Linda was born just two years after Bruce, in 1939, in Indianapolis, IN. She was the daughter of Charles Clark and Thelma (Bullock) Clark. She had three siblings, Tom, Jennie and Constance, or Connie. Compared to that of Bruce, Linda describes her upbringing as "completely different." She was raised in a very strict home with a very strong Catholic influence. Being the oldest child, she was given many responsibilities. She often worked in their family garden and helped her mother nurture her younger siblings  skills that she was thankful to have gleaned later in her life.

Having worked throughout her high school years, Linda was eager to really begin her life as a young adult the moment she graduated in 1957.  She quickly joined the work force, beginning her career at D-A Lubricant, a lubricant distributor in Indianapolis.

Not too long after that, a friend of Linda's encouraged her to take a break from work and go out on a date with a young man she had heard about from a friend of hers who knew him. Although Linda had not met him before, she trusted her friend and soon found herself on a date with a twenty year old, college boy!

It was at this point that Bruce and Linda's paths first crossed. One date turned into two and two turned into three, and before they knew it, Linda says they "just hit it off." Remembering the fun times, Linda happily said, "Thank God for friends!"

Two and a half years later, Bruce and Linda were married in her hometown of Indianapolis. Sadly, Linda's father passed away just two months prior to their wedding. Therefore, the couple decided to remain in Indianapolis with their mothers, where they would stay until 1989.

About 10 months into their marriage, Bruce was drafted into the army and stationed in Germany. During that period of time, Linda was not able to be with him. So, she continued to work while she stayed with a fellow army wife throughout Bruce's year of deployment. When Bruce returned from the service, the two were able to continue walking down their path together.

After renting a small, two-bedroom house for a short period of time, the couple made their first purchase. The house was a small ranch style home in a pleasant neighborhood. It did not take long for their quaint house to become a home, and then too small!  Their first son, Charles, was born in November of 1964, followed by Bryan and Scott a few years later.

As they raised their children, Bruce and Linda constantly strived to instill in them two core values: self-responsibility and a love for family. Bruce says that he wanted his boys to understand that they had to take responsibility for their actions; they would reap the benefit of the good decisions as well as the bad ones. Furthermore, Bruce and Linda wanted to always convey to their children how proud they were of them and how greatly they loved them. Because these two values became the general frame of mind in the Grosvenor household, an appreciation for hard work and a love for family were, and will continue to be, passed down the family line. For that reason, Bruce and Linda both consider their boys to be their prided accomplishments.

As their children grew, Bruce and Linda faced new challenges in life. In 1988, Bruce was unexpectedly laid off from his job in Indianapolis. Because of his own self-motivation and drive, he was quickly put in contact with another Human Resource Management position for which he was qualified. But there was a catch It was in Salem, Indiana, about three hours away from their home. After discussing it with Linda, Bruce decided that interviewing for the position could not hurt, and as it was, he didn't have a lot of other options at that time.

Bruce made his way down to Salem. As he interviewed, he was introduced to the beauty of Washington County. Bruce says that he thought he had "died and gone to heaven!" From the picturesque landscapes to the friendly atmosphere, Salem seemed to welcome the family with open arms. So, when he was offered the position as HR Manager at Ferraloy (currently ICM/K), he gladly accepted.

It didn't take long for the Grosvenors to transition from living a busy city life to being small-town people. After visiting the Salem Presbyterian Church at the request of a friend, they began to fall in love with the people of Salem. Linda said that she felt right at home because "people accepted them." After working for a while in the community, she was offered a job at the Salem Elementary School.  Other jobs in the school system involved working in the high school athletic department and in the school office at the Middle School.  Working within the school system, she had an opportunity to serve many students and staff and make many friends.

Bruce began to get involved in community efforts by joining Awareness Washington County. Eventually, he became a member of the Washington County Community Foundation board, where he served for ten years. He describes that particular service as "the most rewarding period of time" he has ever spent on a board of any sort. He says that it was "the most stable, fun and productive board [he] has ever worked with."

Years later, their path has not taken any major turns, and the Grosvenors remain in Salem. Both retired now, Bruce and Linda live a simple, but fulfilling, life. When not traveling to visit their children or to see another part of the world, you may find Bruce tinkering with computers or taking pictures while Linda is cross-stitching. Perhaps on occasion you will see them working outside in the garden or playing with their grandchildren. And while Bruce often says that he feels like he "will leave the world owing it a lot more than [he] contributed to it," it is safe to say that the Grosvenors have had, and continue to have, a positive impact on Washington County.

One significant way that Bruce and Linda Grosvenor hope to have that impact is through a Touch Tomorrow fund. The two created the Clark Grosvenor Touch Tomorrow fund in hope that they can give back to Washington County what it gave to them from the very first moment they arrived. They see the potential that the county has and desire to help water the seeds that have been planted so that Washington County can grow to even greater heights. Although their path could have led them to any place, Washington County is fortunate and blessed that it brought them to Salem.