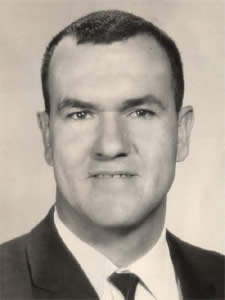 "He was a big man, and could be intimidating in size and presence," reflected Brent Elliott of his late father, John Elliott. "He was quiet, and a good listener. He was a strict parent and a hard worker. He loved to have fun and enjoyed life."

John Elliott passed away in 1994. Five years after his death, his son, Brent, established a scholarship in his father’s memory with the Washington County Community Foundation. "Education was important to Dad," commented Brent. " He taught Industrial Arts at Salem High School for 28 years and he pushed his own four children to go to college and earn degrees." As a teacher, John challenged his students to think and maintain a high level of discipline and integrity. This scholarship fund is a testament to John’s values and work ethic.

Born on February 19, 1936 in Washington County to Fred and Anna Elliott, John received his education from Canton Grade School and Salem High School. He married Sharon Cauble on September 1, 1956. Together, they had four children, Heather, Brent, Linda, and Tara. He was a member of Canton United Methodist Church.

In addition to teaching, John explored a variety of opportunities during his life. He was a farmer, raising both livestock as well as growing corn, wheat, and soy beans. John especially loved horses. There was rarely a time in his adult life that he didn’t have horses. John put his horticulture talents to use when he was part owner of Cauble Florists from the late 60’s to the mid-80’s. He focused particularly on growing and selling seasonal plants.

John was active in the Rotary Club throughout his adult life, and served as President from 1962-1963. He also served as the District Youth Exchange Chairman for the Rotary and he and his family sponsored several exchange students from Africa, Japan, Europe and Australia. Through his direct participation and leadership in Rotary’s Youth Exchange Program, he touched the lives of people on almost every continent.

In his spare time, John put his interests and talents to good use. He enjoyed drafting, metalworking, carpentry, and especially woodworking. In his later years, he built a woodworking shop where he made furniture for his children, "His passion was to design and create furniture," stated Brent. "He especially enjoyed working with cherry wood."

In1972, John, with Brent’s and his families’ assistance, designed and built a home east of Canton, where he lived until his death. The house is very unique in that it actually straddles a creek. "People believed the creek would flood the house during high rain, but it never has," stated Brent.

When asked why he started the scholarship fund in honor of his father, Brent replied, "I asked myself ‘How could we honor Dad?’ He took the Rotary’s maxim, ‘Service above Self’ to heart. Looking back on his life, he was an educator and a mentor. Establishing a scholarship fund in his honor seemed like a good way to demonstrate some of the things he believed in."

Brent established the John Elliott Scholarship Fund in 1999 with an initial investment of $30,000.00. Since that time, Brent and other members of the family have added to the fund.