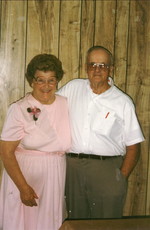 Stanley Burns always had a passion for gardening. His daughter, Becky Smith, said he put out a big garden every year and gave most of the food away to friends and neighbors. He did it out of the pure joy of working outside and living off the food he grew.

This need to make sure people don’t go hungry is one reason Stanley decided to donate $7,200 to the Washington County Food Bank. The money came from a church in Pekin where Stanley was a trustee. The membership had died and the building needed to be sold and, being the sole trustee, Stanley decided to make the food bank the recipient of the funds.

In turn, the food bank decided to take a part of that money and start a fund with the Washington County Community Foundation called the Stanley and Malvery Burns Fund for the Food Bank.
Stanley was born to Jimmy and Sarah Burns on September 26, 1915, in Clay County, KY. He grew up there and attended Berea College, where he studied agriculture. He lived and worked for a doctor, who put him through school. He even played basketball for Berea’s team and graduated in 1932.

Although he studied agriculture, Stanley’s career was mostly spent in print shops, including a large newspaper in Lexington, KY and Green Banner Publications in Pekin. He also worked for Borden Cabinet and eventually retired from Jeff Boat, where he worked as a carpenter. He helped build the big paddle wheel on the Mississippi Queen. “We have some great pictures of him with that wheel,” said Becky.

While in high school, he met his future wife, Malvery Stidams. Together, they had three children: Sara House, Danny Burns and Becky Smith.  Malvery passed away in October 2000.

Stanley and Malvery came to Washington County more than 75 years ago, looking for work. Malvery’s brothers had moved to the area and found jobs. Stanley had tried to farm the land they lived on in Kentucky, but had little success thanks to the steep hillsides that surrounded them.

After moving to Washington County, Stanley helped start the Blue River Coon Hunters Club. He also spent a lot of time cultivating three large gardens he and Malvery had on their land. “Mom and dad were raised during the depression,” said Becky. “Food was tight and they always wanted to make sure that people who needed food had it.”

She said that’s why it was so important to her father that the money from the sale of the church be used to support the food bank.

“He has been in that position before,” she added.

Stanley said he has had a very good experience in Washington County. He wants people to remember him as a very thankful person who has been very blessed and wants to share it.