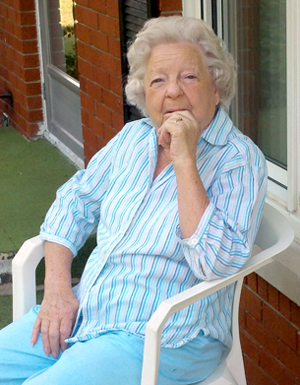 “Our lives are a puzzle and we all have to fit together in some way,” believed Betty Brown, as she looked back over her life, all 90+ years of it.

“My life is pretty simple, “ she stateed. “I loved my husband, my daughter and my friends. They were and still are the most important parts of my life.”

Betty was born in her grandmother’s home in Salem and lived most of her life in “Salem.” Ironically, if she wasn’t in Salem, Indiana, she most likely was living in Salem, Illinois. She attended Salem High School (Indiana) and graduated mid-year in 1944. She met her future husband, Walter, at the ice skating rink. Walter graduated from Hardinsburg High school in 1939. Actually, she was dating one of his good friends when they met. Walter and Betty started out seeing each other as friends. He would pick her up for a drive and had her home by 6:00 so she could go out on a date. Eventually, they had their first real date when Walter took her to a concert in French Lick. Soon after, Walter left to serve in the Navy in 1942. He served in the Navy from 1942-1946.

Betty and Walter were married on October 22, 1944, in Minneapolis, MN, where Walter was stationed. Walter jokingly told his friends, “I waited for her to grow up but she never did, so I married her anyway.”

Betty, her mother and her future mother-in-law took the Monon train to Minneapolis. However, it was wartime and soldiers had priority, so they waited several long hours at the depot in Chicago. Finally an army Captain saw them and took pity on their plight. He offered to allow them to travel with him, as he was headed for St. Paul. They became friends on the train and corresponded for several years after that trip.

Betty and Walter were married in a Baptist church among a sea of sailors. Betty was able to stay with him until Christmas. She enjoyed her time in Minneapolis and loved watching skiers go down the mountain. She had never seen that before.

After Walter was discharged, he started working for a printing company, CT Dearing, which was later purchased by Salem Gravure. He worked for them for 42 years and was a wonderful provider for his family.

They built their home in Salem, Indiana and lived many, many happy years there. For Betty, her family and the home she made for them were the centerpiece of her life and her pride and deepest joy. Their home was their safe and happy place.

Betty and Walter had one daughter, Tena. She was born October 3, 1950. Betty and Tena were very close. Tena married John Williams in August of 1988. Walter and Betty welcomed their new son-in-law to the family and soon John became the son they never had.

They were living the American Dream until Walter became sick and was diagnosed with cancer. He passed away in 1992 in their house with Betty and Tena by his side.

Fifteen years later, Tena was diagnosed with cancer and passed away in November of 2007.

For the rest of her life, Betty’s son-in-law, John, remains one of her closest and dearest friends.

Betty stated, “I don’t mind growing older, I just don’t want to be old. My doctor says I have a 92-year-old body with a 40-year-old brain. I like that. I realize that life is an honor and when you look for it, you can see that. Like, seeing the eclipse was an honor.”

Because Betty lost Walter and Tena to cancer, and she herself is a cancer survivor, she wanted to do something for others who are battling this disease. So, she established the Betty J. Brown Cancer Survivor Fund in the Washington County Community Foundation. This fund will help others who are battling cancer with transportation costs associated with getting treatment.

Betty stated that she just wanted to do something to help others in our community. She firmly believed that you have to be a good friend to have good friends. She was blessed all her life with good friends and she was very grateful for them.

Betty passed away June 28, 2018. In the end, Betty just wanted to be a good friend to others in Washington County, help them through a difficult time, and hopefully inspire them to pay it forward. The fund she established in the Washington County Community Foundation will help her do exactly that.

The Washington County Community Foundation currently has a matching grant available. This makes it even easier to establish a new fund. Call Judy Johnson or Lindsey Wade-Swift at the Foundation office at 812-883-7334 to learn more. Now is a great time to start your Legacy. Future generations will love you for it.