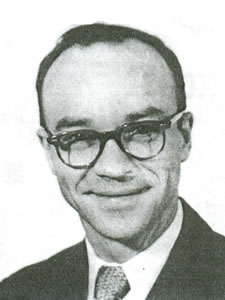 When asked to describe her late brother, Betty Motsinger replied, “Billy loved children and education. He dedicated his life to both.” So it was an easy decision for Betty, on behalf of her late husband, Cleo, to establish a scholarship fund in the Washington County Community Foundation in Billy’s memory. “I think Billy would be very pleased with this fund,” stated Betty. “He would be so happy to know that his memory will live on, and each year, a student at Salem will receive a scholarship in his name.”

Billy was born in 1919 and grew up in Salem. He graduated form Salem High School and earned a Bachelor of Arts degree in mathematics and science from Butler University. He earned a Master of Science degree from Indiana University and also earned 66 hours of credit beyond the Master’s level from Butler, Indiana and Purdue universities.

He was an army veteran, having served four years in WWII in both the European and Pacific theaters. He worked in the Indianapolis public school system for 22 years. He was a member of the Indiana Association of Public Schools, Phi Delta Kappa, and the Indiana Vocational Advisory Council. Billy served on the board of the Teachers Credit Union and also served as President of the Indiana Personnel and Guidance Association. In 1965, he was chosen Man of the Year in the area of pupil personnel. Billy also served on the governor’s Commission on corrections and the mayor’s Commission on Anti-Crime Crusades.

In 1971, he became the superintendent for Salem Schools. He served in that position for four years. Perhaps his greatest accomplishment in his short tenure was the construction of the Salem Middle School, which was one of his dreams. Like all major construction projects, this one had a lot of headaches. However, Billy accepted the challenge and gave countless hours to make the new Salem Middle School a reality.

Not many people come full circle in their lives, as Billy did. Rising to Superintendent of the school system that provided him his education for the first twelve years is an unusual, outstanding accomplishment. Helping to build a new educational facility is a once in a lifetime event. Being honored with a scholarship fund, which will provide a Salem graduating senior with money for college every year, forever, is a legacy that will never die. Not bad for a “kid from Salem.”