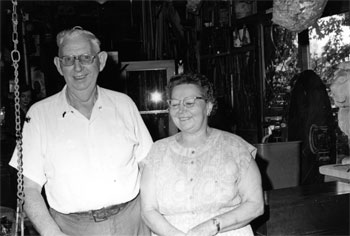 Treasures. That is the word that would describe the store at Punkin Center where Mabel Gray spent most of her life. Treasured possessions and treasured memories.

Mabel was born July 31, 1912 to Jakey and Audra Standish Batt. Five years later came Mildred and another five years brought Earl. “Growing up we did whatever there was to do. The main job was to go get the cows to milk” “We lived on top of a hill; the well was at the foot. Mom had to carry water for wash and everything else until a well was drilled.” Mabel, Mildred, and Earl all got along while growing up, but Mabel didn’t necessarily get along with school. “I went to Ebenezer School until 8th grade. I never liked school. I got lessons for the day and would then forget them.”

Mabel met Add Matthew Gray when she was 22 years old. “I met my husband while looking for work, he got me for three dollars,” laughs Mabel. Add and Mabel raised pets of all kinds and actually had nine burros at one time. The burros were used to pull their nieces and nephews in a buckboard buggy through parades anytime or in any town. “The dog used to jump on the burros backs and would jump off before they went very far.” They also raised all kinds of chickens and dogs. Add and Mabel worked and ran the store, the backbone of Punkin Center. They lived in the upstairs of the store and enclosed one of the porches to make a small kitchen area. “I liked to cook, but never had time. I would put something on to cook and have to finish it after waiting on people. I rarely sat down to a meal unless it was breakfast.”

The Punkin Center store was like all country stores. “We could get anything and everything. If someone wanted a different kind of cereal, we would order it, they would buy a couple of boxes and the rest of the case was left. That is what put the country store out of business.”

One of the biggest attractions at the store in the 1930’s and 1940’s was the different musicians that would play there. Another attraction was the Punkin Center baseball team. “Add used to haul them from one place to another,” recalls Mabel. One of the fondest memories Mabel has of the Punkin Center store is the summer of the Kraft cheese promotion. “Kraft advertised all summer about giving away cheese to patrons. So many people showed up they had to quit giving it away.”

Kraft wasn’t the only cheese served at the store. “One of the biggest things we sold was rat trap cheese and people would come a long way to get it.” Mabel and Add also served a lot of Coca-Cola at the store, starting in 1921. Mabel sold coke for 84 years at the store and has a plaque hanging in her room thanking her for her loyal service.

There were always things to do at the store. The store was close to a creek. “Men used to catch snapping turtles out of the creek and we cooked them.” There were horseshoes in the back that men also like to play, but the biggest activity was cards. “Every night there were people to play cards at the store. I had to stay up and play canasta and rook.”

The most notable feature of the store was the collection of interesting objects. A wooden Indian, steer horns, costumes, and music boxes are just the start. “People brought in things they didn’t want. We never tried to collect a lot of things and we didn’t buy it to make much money, just bought it to sell it to someone who wanted or needed it.” Mabel is a crafty lady who can just make things look better. “I don’t like to see things go to waste.” “Add used to make swings out of old parts and there were whirligigs all over the place.”

Several items Add and Mabel did collect were pencils and spoons. “One of the pencils is over 100 years old and was Add’s when he was a kid.” “The spoon collection started when I got some spoons from the James Whitcomb Riley home in Indianapolis. I had the gold spoons and just started collecting them from there.”

After Add’s death in 1988, Mabel continued to run the Punkin Center store until 2006 when she moved to The Waters in Salem. “There was a three day sale at the store,” recalls Shirley Batt, Mabel’s niece, “People came from all around to look at and buy the collectibles.”

Not all treasures are material. You can’t put a price tag on the most valuable treasure that left Punkin Center in 2006. Mabel. Her stories, her care, her memories, her love of Punkin Center and the people that grew up there and future generations that will call Punkin Center home. That is the best treasure of the Punkin Center store.